High atop Nationwide Arena, home of the Columbus Blue Jackets National Hockey League (NHL) Team, there are two remote control aircraft pilots perched in a catwalk, about to launch one of the game time favorites: The IGS Energy Blimp. Stocked with prizes attached to parachutes, and a new “blimp view” Fan Camera, the blimp flies around the 18,500-seat arena, searching for prize winners and Fan Cam stars. 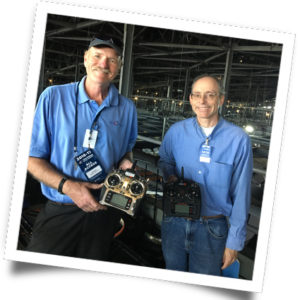 The Blue Jackets have just left the ice for their first intermission and pilot, Terry Nitsch, stands in section 210, using the blimp’s remote transmitter to create a truly unique experience for fans.

“Most blimps in sports will just drop coupons or fly around the ice without actually going over the crowd,” Terry said. “We have the Blimp Cam attached to pan the crowd as we fly and we also drop parachuted prizes, so it’s a pretty neat thing we do in Columbus.”

Prizes can range from t-shirts and hats to autographed player photos and food coupons, and the fans are always enthusiastic when it flies.

Meet the experts behind the blimp.

Terry and his four co-pilots – Mike Barbee, Michael Dinneen, Lou Matustik, and Kurt Koeling – are radio control aircraft hobbyists. “Some of the best in Columbus,” Terry, who accepted the role of CBJ blimp pilot 9 years ago, claims. 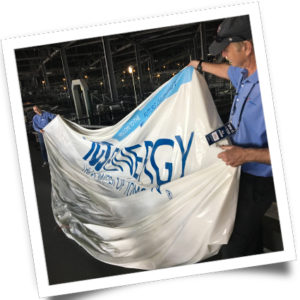 And while there isn’t much turnover on their team – come on, you get to watch hockey from a catwalk and fly a giant blimp around an arena – when they bring on a new pilot, there are plenty of things to learn. The guys arrive two hours before each home game, making sure that all of the batteries and transmitters are charged, prizes are prepped, and the blimp has the right amount of helium and weight to balance it out. “Every system in the blimp is different,” Terry said, “so you’ve got to know how they all work independently and together.”


So, how do they decide when to drop a prize?

Once they’ve got the blimp up and flying, the pilot must be conscious of certain areas in the arena where there are drafts of air so as not to lose control of it. They also switch the control of the blimp to another transmitter mid-flight, so paying attention to the location for that is important. The pilots work to spread prizes and camera time out all over the arena. “We only have six prizes to drop, so if we have the opportunity – and we can actually see the people – we try to drop it to a kid and try to avoid dropping to an opposing team’s fan,” Terry shared. Lesson learned: If you want a parachuted prize, bring a kid and try to avoid sitting next to an opposing team’s fan! And, most importantly, have a great time.

At IGS Energy, we are proud to support the communities where we work and live. In addition to our sponsorships, as with the Columbus Blue Jackets, we support programs in the areas of energy sustainability, social enterprise, and social entrepreneurship.

check out other ways IGS is involved in the community